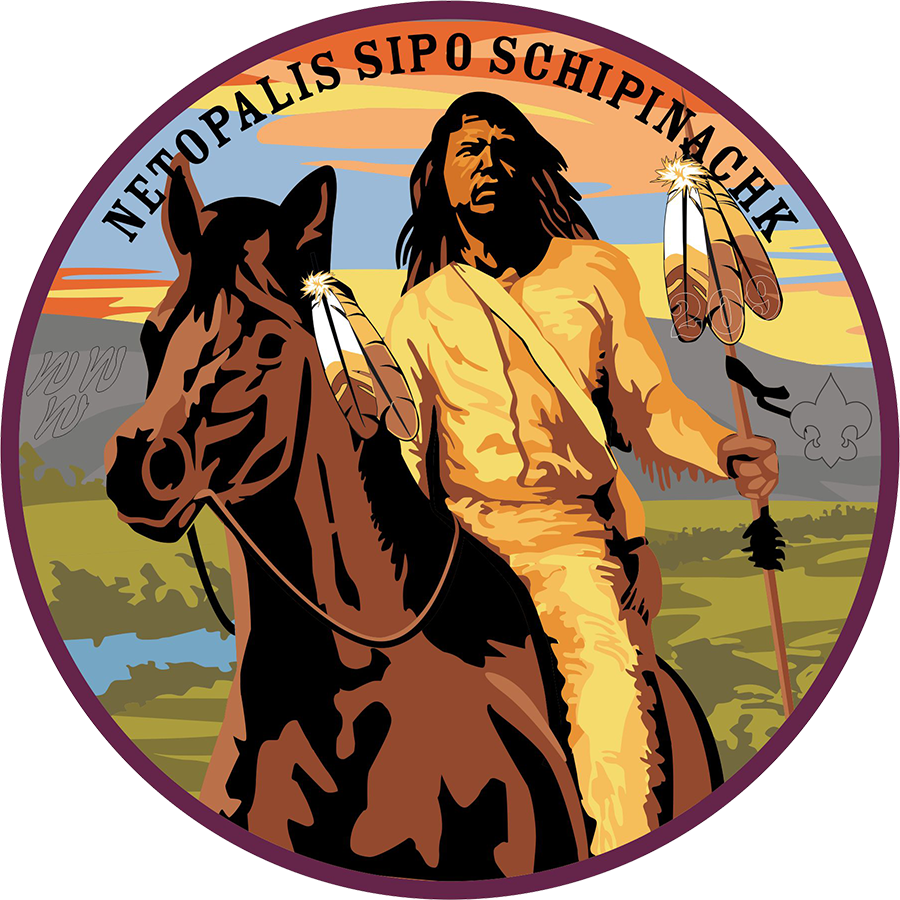 The beginnings of the Netopalis Sipo Schipinachk Lodge can be traced back to February 1st, 2003, when a group of Arrowmen met at the Lakeview Lodge facility of Sid Richardson Scout Ranch. The meeting came about as a result of the merger of two lodges; Nishkin Halupa A Pe Lachi (the “Old” Longhorn Council) and Huaco (Heart O’ Texas Council). The two councils had formally merged a few months prior, and the lodges maintained separate NOAC contingents in 2002.

That first meeting, and more to follow produced many fruits; a Lodge Bylaws, a 1st pocket flap design, and our Lodge’s name and totem. The new name, Netopalis Sipo Schipinachk, translated to “Warriors of the River with Outstretched Arms,” and the totem was appropriately chosen to be a Warrior on Horseback.

The initial structure of the lodge was unique, to say the least. Naturally, we had a Lodge Chief, and a set of officers to assist him. However, two “Tribes” were also created, based upon the geographical boundaries of the previous lodges. Originally called the Northern and Southern tribes, they later took the names of the prior lodges, and became the Nishkin and Huaco Tribes, respectively. Each Tribe had a Chief and their own set of tribe officers that would facilitate Lodge activities in their respective regions. Therefore, the Tribes were largely responsible for all events in their parts of the Lodge, such as staffing Ordeals. The Lodge Bylaws stated that the Tribe system could only be abolished by signature of the Chief of the Fire (Council Executive), or by a majority vote of the youth of the Lodge Executive Council. The youth of the LEC voted in 2007 to abolish the Tribe system.

Scheduling of Lodge events have changed through the years. The same basic events have occurred each year, with a few exceptions. At least one Ordeal has been held each at Camp Tahuaya, Worth Ranch, and Sid Richardson every year since the lodge formed. A few Chapter-run Ordeals at camporees have been successful, as have a few Ordeals each at Hills and Hollows near Denton, and Camp Braley near Waco. Both Lodge-run and Chapter-run Work Days at the various camps have doubled as Brotherhood Opportunities, and have also been highly successful.

The first few years of its existence, the Lodge attended Spring Conclaves (hosted by the Section), and held Fall Fellowships each year, rotating between the three main camps. Due in part to poor attendance, the Fall Fellowships fell out of favor, and began being hosted in early Spring, before Section Conclave.

Lodge banquets have varied widely throughout the years, both in terms of locations and timing. Originally held in Late Winter solely as Banquets, they have changed their timings to Late Summer, and are considered now to be the Lodge’s “Fall Fellowship” event.

Troop elections and callouts were also originally scheduled at different times of the year. They are now held throughout the lodge during January and February, and spring camporee callouts have been chosen to serve incoming candidates best.